When April Salas set out to acquire information about energy usage in Hanover, she was in for an uphill battle.

Salas is the sustainability director of the town, population 11,500, which has the resources to consider such a project. In 2018, Hanover decided to put together a program that would allow it to procure green and renewable energy. But to do that, officials needed townwide information about energy usage.

Liberty Utilities serves all but about 10 houses in town, which should have made things easier. But it took six months to wrangle the information.

“It was a nightmare,” Salas said.

The data that came in was a mess. There was no consistency in formatting, with data points scattered across spreadsheets and PDFs. Hanover ended up having to pay $30,000 to hire a consultant to sort through the data just so it would be usable.

Getting this essential information shouldn’t be so hard, Salas said. “It’s like fighting for your medical records,” she said. “Why make it so costly and hard to access something that I own and have a right to?”

That’s why Salas has joined other advocates in the state and beyond to push for the creation of a statewide energy data hub – so that standardized information from utilities and other energy providers can be aggregated and made accessible. The proposal, which is before the Public Utilities Commission, would be an important step toward making essential information about energy usage available.

The Hanover project ultimately fell apart at the eleventh hour when Liberty Utilities told the town that the project would have to go through them because of requirements that a utility provide certain information to the state about its customers.

“It shouldn’t be this hard and complicated,” said Salas, who has worked as an infrastructure systems analyst for almost two decades. Because it took six months to gather six months’ worth of data, Salas said it would be an impossible project to repeat – and that means the town would have no chance at updating the information.

But the information is required for almost any energy-related project, including those that save money, reduce usage, or provide consumers a choice in where their energy comes from.

“If Hanover can’t do this, where is the hope for the rest of the communities?” Salas said. Energy poverty is an issue in New Hampshire that leaves people struggling to afford high energy costs, she said.

“People shouldn’t have to pay a premium for energy forever in order to enjoy this,” she said.

After Salas realized that a piecemeal approach was unworkable even for towns with the most resources, she became a staunch proponent for reform.

For any energy initiative, the first step is knowing how much energy is being used. Currently, providers figure this out by requesting PDF copies of old bills. The same thing is true at the community level.

But that involves some pretty large inefficiencies, and it can even prevent projects from moving forward at all, like in Hanover. And specific information about peak demand, behind the meter generation from solar panels, for instance, or where energy is being used can be hard, if not impossible, to determine.

Getting data out of utilities and into usable shape for an energy project often becomes an insurmountable barrier.

“Often projects fail getting past that hurdle, because getting data out of utilities systems is just too daunting,” said Ethan Goldman, the founder of Resilient Edge, who represented Clean Energy New Hampshire in this docket.

A statewide data platform would be the first step to solving the problem – and that’s what is currently up for consideration before the utilities commission. In a settlement agreement presented earlier this month, three of the state’s largest utilities agreed to a plan that, if approved, would lead to a groundbreaking platform, allowing for the aggregation of essential information about energy usage. The town of Hanover, Clean Energy New Hampshire, and the Office of the Consumer Advocate, among others, also worked on hammering out the details of the plan and signed on in support.

It would create a data hub – one unified system that would be used across the state. The state’s three largest utilities would feed information into the system initially, with the ability to include other energy providers in the future.

Third-party providers could then use this information to offer targeted energy services – like managing energy usage from a smartphone, a guaranteed bill, or more accurate pricing information.

Michael Murray, the president of Mission:data, a Seattle-based nonprofit that advocates for consumer access to energy data, compared the current system with going into a supermarket where there are no prices on any of the items for sale. At the end of the month, you’re presented with a big bill, but there are no tools or information to manage your spending.

Creating an energy data platform would bring the state a bit closer to a grocery store model – where prices are transparent and consumers have more control about what and how they’re spending.

Murray has been involved in dockets like this across the country, and he’s optimistic about the plan that has come together in New Hampshire. It’s relatively comprehensive compared to other states, which have taken a more piecemeal approach.

In Illinois, for example, Murray said there was a failure to describe all the types of data that a customer should be able to transfer to a third party of their choice.

“If you don’t specify that information at the front end, most likely you’re going to end up with a system that is subpar,” Murray said.

The docket in New Hampshire also accounts for future changes and improvements, which Murray said has been a pain point in other states, such as Texas, which has failed to make necessary updates since the system wasn’t designed with change in mind.

“It’s very frustrating to have software that is designed to never change from day one,” Murray said. “So we avoided that challenge here.”

The proposal in New Hampshire includes a governance process for changes.

And New Hampshire is also looking at a single unified system that will span its three largest utilities – Unitil, Eversource, and Liberty. That can be a draw for third-party providers that are looking for places where it makes sense to expand, Murray said.

Recent studies show that savings from these energy services could range from 6 percent to 18 percent – a significant savings for ratepayers, especially in New Hampshire, where energy costs are relatively high.

“That has been an elusive goal for the state,” said Rep. Kat McGhee, a Hollis Democrat, who also worked on putting together the energy platform docket.

Others involved in the process, including Consumer Advocate Don Kreis, believe it could be the key to energy savings in the future.

While the cost of the project won’t be determined until a “request for proposal” is approved, it’s ratepayers who will ultimately fund the platform. But ratepayers also stand to save money.

Kreis said the platform would benefit everyone, from the carbon-conscious on the “soft energy path” laid out by energy policy analyst Amory Lovins in 1976 to “the sort of customer who cranks up the backyard hot tub, cracks open the Ayn Rand, and enjoys the benefits of our country’s abundant fossil fuel resources.”

And, Kreis said, those who fall somewhere in the middle stand to gain, too. He urged the commissioners to approve the docket, which he said was the best document he’s signed since becoming consumer advocate in 2016.

For Kreis and others, the docket is among the first steps to realizing the promise of deregulating the utilities, which happened in the 1990s with the goal of allowing customers more choices and better, more competitive energy services. But without energy information, that can’t happen.

“The idea is to sort of democratize the data,” said McGhee, who serves on the House Science, Technology, and Energy Committee. McGhee has also been closely involved in ushering the project forward through the process at the utilities commission.

McGhee’s background is in software, and she sees the proposal as a way of getting out ahead of problems that are likely to come crashing down in the future.

“You can’t manage what you can’t measure,” McGhee said – a line she attributed to energy activist Pat Martin. The vision of this project, McGhee said, is to first make the data available so that it can then be leveraged.

The settlement agreement came through in May, and now it needs to be approved by the commission – which has been notoriously slow to issue decisions so far this year, with several key dockets held up. McGhee called it a black hole. The agreement would allow for a request for proposal so private companies could put forward plans and outline the cost of putting together the platform.

There are a lot of steps before the platform itself would be constructed, but advocates are optimistic about what it would mean for the future of energy management in the state.

“Energy is a complex topic,” McGhee said. “And in order to get a handle on it, and be able to truly discuss it, you first have to be able to see what your energy landscape looks like. We don’t have that ability today.” 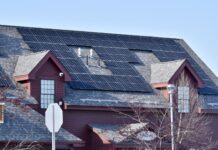 Essential information about energy usage in the state is elusive, and that’s a costly problem