House Democrats are advancing a bill that would require consent to be taught in New Hampshire public schools as part of a school’s health education curriculum. (Dave Cummings | New Hampshire Bulletin)

It was supposed to be the report that would help fix New Hampshire’s unequal education system.

But when the yearlong, $500,000 Commission to Study School Funding released its final findings in December, one item on its recommendations raised eyebrows: the return of the “donor towns.”

For years, the practice of taking excess state property taxes from richer towns and redistributing them to poorer ones had been a central component of New Hampshire’s school funding system.

In 2011, with bipartisan support, that practice was eliminated. Last December, the 16-member school funding commission recommended its return.

That appears unlikely to happen this year. Republicans in Concord are pushing forward with a $100 million cut to the statewide education property tax in the state budget – with no change in how the tax is distributed.

But the question over how to structure the tax, known as SWEPT, continues to fuel debates in New Hampshire.

Others say the cut will have positive effects for all property-tax payers in the state.

The fall and rise of the donor town

By the time Gov. John Lynch was elected to his fourth term, the political stage was set for the end of the New Hampshire donor town.

Under SWEPT, towns in New Hampshire are required to collect a certain amount of property tax for education funding purposes – in addition to any local property taxes imposed by the board of selectmen.

That “statewide” tax is then used to offset however much the town receives in school funding adequacy aid. Raise a lot of SWEPT money and a town doesn’t receive much state aid; raise a low amount and the aid kicks in.

The system helped offset the obligation the state had to provide adequate education funding out of the state’s general funds. Yet as a way to create equitable school funding from district to district, the system was imprecise. Some towns, whose property values were high, raised more money for education than they needed. Others had low-value properties.

New Hampshire had a mechanism to attempt to redistribute that money. Towns that raised more from the tax than was statutorily necessary had to pass those property taxes back to the state to be allocated to towns whose SWEPT revenues were low, creating the donor town. Wealthier towns had been protesting the system for years, arguing the local tax dollars should stay in local control. When Lynch ran his 2010 gubernatorial campaign, he made his position clear, too.

“I’m absolutely against donor towns,” he told the Portsmouth Herald in 2010. With the help of a Republican-led Legislature, the mechanism was removed the following year.

Last December, the proposal returned, in a new format.

The Commission to Study School Funding had convened for a year to determine the state of school funding and find ways to even out the disparities between wealthier and poorer towns. Among its proposals was an end to towns’ ability to keep the extra SWEPT tax they collected.

“To the extent that the state budget relies on a State Property Tax to fund some or all of its state budget obligations under a reformed distribution formula, the state should eliminate the ‘excess-SWEPT’ grant and such excess funds should be applied through the reformed distribution formula to improve student and taxpayer equity,” the report stated.

In other words, the commission suggested, allowing richer towns to keep their extra raised SWEPT money was hurting taxpayers in poorer towns, whose property-tax rates sometimes quadrupled those with high home values.

Because so much of state aid is distributed on a uniform per-pupil basis, with little assessment of community characteristics and student needs, the current distribution formula results in student outcome inequities and places relatively greater tax burdens on poorer towns,” the report stated elsewhere.

After the commission’s report, it took little time for the cities and towns who had opposed the “donor town” tax system to raise the alarm.

Now, a coalition that years ago pushed Lynch and other politicians to remove the excess-SWEPT provisions has reassembled.

Lebanon has joined with Portsmouth and other cities and towns to lobby lawmakers against an effort to do so, city manager Shaun Mulholland said at a Feb. 3 city council meeting.

“This reconstituted coalition opposes the use of the broad-based property tax (SWEPT) to redistribute revenue from some communities to other communities intended to resolve the education funding issue in our state,” a memorandum presented at the meeting read. “The feeling of the municipalities involved is that a more comprehensive study should be conducted looking at all other sources of funding to address this issue instead of focusing solely on SWEPT.”

The memorandum argued that Bedford and Londonderry could benefit from excess property tax dollars sent over by municipalities like Lebanon and Portsmouth.

“There are questions as to whether these two municipalities are ‘needy’ or ‘property poor’ regarding education funding,” it added.

The pushback from some cities is irking other prominent figures in the education funding debate.

During a June 11 event commemorating the 30th anniversary of the filing of the “Claremont lawsuit” – in which the state Supreme Court reoriented the state’s responsibilities to fund schools – speakers took aim at the donor towns’ resistance.

“I think that those wealthy districts should be proud of the education that their kids get, but I think they should be ashamed of themselves for trying to thwart a more fair system,” said John Tobin, one of the attorneys who originally sued the state over its funding system in 1991.

“Let’s call it for what it is,” Volinsky said “This is discrimination against the poorest communities in the state.”

For their part, conservatives counter that some of those differences are inevitable – the product of differing economic conditions in towns that could be driven by anything from proximity to a highway to broader demographic shifts.

“As long as we continue to say we are going to have rigidly drawn districts that are property-tax funded . . . there will always be inequities,” said Drew Cline, the chairman of the State Board of Education.

Despite the suggestions of the funding commission, the renewed proposal to spread property-tax collections among towns hasn’t found much political traction in Concord this year.

Instead, Republican lawmakers who control the House and Senate want to take the tax in a different direction: a cut. The budget – which will go before a vote in the House and Senate Thursday – would lower towns’ overall obligation by $100 million, allowing them to free up revenue.

Gov. Chris Sununu has praised the cuts as the most important piece of the two-year budget, when combined with an increase in state building aid for schools and other measures.

“The biggest win there is the tax cuts, $150 million of property tax relief that goes back to folks all across the state,” Sununu said at a June 17 press conference.

Behind the cuts is a bigger push by New Hampshire conservatives to shift the state’s focus away from making all schools equal in what they spend on education and toward targeting state aid to poorer districts and leaving richer districts alone.

That means rather than redistributing property taxes among towns, lawmakers instead push for supplemental increases to the state funding formula that are aimed at giving struggling districts an extra boost.

“It’s a way to collectively do it without triggering that anger from people saying ‘my property tax revenue should just stay in my town,’ ” Cline said.

But this year’s effort to cut the SWEPT tax has drawn criticism from Democrats, who say that the temporary tax reduction in 2022 would create a “yo-yo effect” for towns trying to plan for funding. And they’ve argued a one-size tax cut helps only those property-rich towns that have excess revenue to begin with.

A June 14 report from Reaching Higher, an education policy organization in the state, suggested that the budget’s proposed elimination of “fiscal capacity disparity aid” – a targeted aid program meant to help towns with lower-income students – could wipe away any advantages of a cut in the SWEPT tax for property-poor towns.

Berlin, for instance, would lose $1.6 million in funding in the next fiscal year from the loss of fiscal capacity disparity aid, according to the report. The SWEPT tax relief would help the city recover only $177,000, a net loss of $1.4 million, the report states.

That $1.4 million loss would need to be absorbed by the school district through budget cuts, offset with other revenue such as one-off school building aid, or made up with local property taxes. 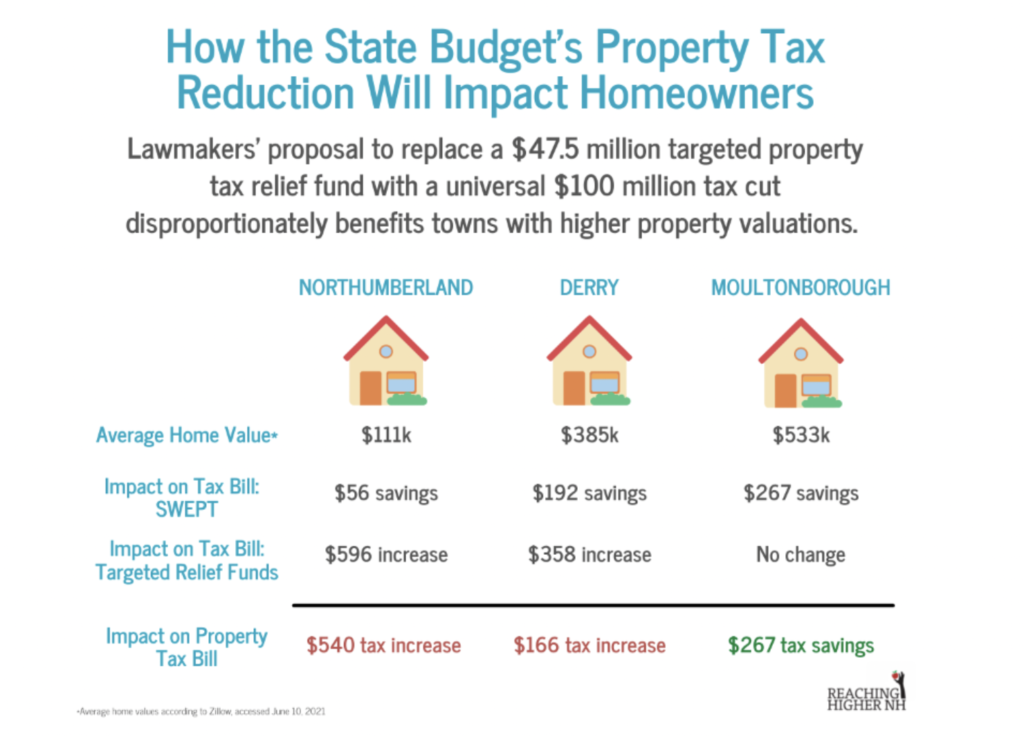 Property-rich Moltonborough, in contrast, would gain an extra $1.8 million in tax relief, allowing the town to put that money toward reducing taxes down the line.

“This proposal to replace the targeted relief fund with a tax cut disproportionately benefits owners of higher-valued properties, while ultimately resulting in a cut in funding for residents in towns with lower property tax bases,” the organization said in its summary of its analysis.

Cline, who also serves as president of the Josiah Bartlett Center for Public Policy, has disputed those findings, noting that they did not include a number of other aid provisions for school districts and towns, including increased revenue sharing of the meals and rooms tax with towns, $30 million in one-off school building aid, and an additional targeted aid package added into the budget.

Still, lawmakers have sparred over the intended and unintended effects of the cuts.

On the Senate floor in early June during a marathon debate over the budget, Democratic Sen. Jay Kahn of Keene argued that property-tax reductions should be directed toward the towns that need them more.

To Senate Majority Leader Jeb Bradley, the question is simpler.

“Let me remind my friend from Keene that residents of those towns he called ‘wealthy towns’ – not everybody in those towns are wealthy. So we’re back to the original question I asked: Do we support property tax relief for New Hampshire citizens or not?”

Yet even the senators’ hometowns told different stories.

Under the proposed funding system, Keene would see a $445,000 net loss in state aid between the $100 million property tax relief and the loss of fiscal capacity disparity aid, according to the Reaching Higher analysis.