While most of New Hampshire’s girls are white, the population of diverse girls increased by 61 percent between 2006 and 2019, according to a new report by the New Hampshire Women’s Foundation.

Of the 125,000 girls who live in New Hampshire, 7 percent are Hispanic or Latina, 5 percent are multiracial, 3 percent are Asian, and 2 percent are Black, according to data through 2019. New analysis of that data shows that girls experience disparate outcomes depending on their race, geographic location, and gender. 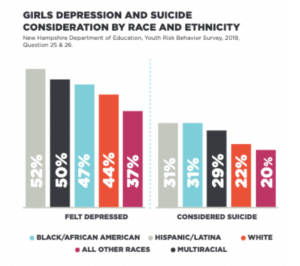 For instance, the report found that disparate health outcomes between boys and girls were exacerbated by other factors like race, ethnicity and geography. When it comes to mental health, girls in the state are more likely to suffer from poor mental health than boys, with the greatest depression and suicide consideration rates in the Winnipesaukee and the greater Sullivan areas. That was more so for some girls of color; 52 percent of Hispanic or Latina girls reported feeling depressed and 31 percent said they considered suicide.

While the rate of girls experiencing poverty in New Hampshire is one of the lowest in the nation at 8 percent, more girls living in the rural parts of the state are likely to live in poverty. In Coos County, for instance, 13 percent of girls did as of 2019. In Sullivan County, it was as high as 18 percent, according to data from the U.S. Census Bureau. Overall, the report found, 15 percent of girls receive some sort of government assistance.

The report also highlights trends in use of contraception among New Hampshire girls; as the use of the birth control pill and IUDs, or intrauterine devices, has gone up, condom use has gone down, the report found, suggesting that this may be linked to a 43 percent rise in cases of chlamydia since 2014. Chlamydia is an STD that disproportionately affects women and girls, according to the report.

Girls are also disproportionated affected by bullying, sexual violence, and intimate partner violence than boys, according to the report; 17 percent of girls experienced sexual violence in the past year, and 65 percent of sexual bullying or harassment reports at school are filed by girls.

▪ You can publish our graphics and any photos that are credited to New Hampshire Bulletin with the stories with which they originally appeared. For any other uses, you must seek permission from us at [email protected]

▪ Content should not be published behind a paywall; please reach out to the editor-in-chief if you have questions about your particular paywall system.

Amanda Gokee is the New Hampshire Bulletin’s energy and environment reporter. She previously reported on these issues at VTDigger. Amanda grew up in Vermont and is a graduate of Harvard University. She received her master’s degree in liberal studies, with a concentration in creative writing, from Dartmouth College. Her work has also appeared in the LA Review of Books and the Valley News.

Commentary: Does systemic racism exist in New Hampshire? by Dan Weeks June 2, 2021
Muhammad Ali and us: A conversation with Ken Burns by Mike Pride September 7, 2021
Americans in climate-threatened regions eager for solutions… by Laura Cassels November 1, 2021